A downloadable work in progress for Windows

- LODs may fade in too early, resulting in a noticeable loss of detail on meshes closer than a few meters from the camera. Working on that.

- ENEMIES DON'T HAVE WEAPONS! Enjoy the freedom, next interim post is all about AI combat improvements and NPC vendors. :)

A series of ideas I've had out of boredom, packed into a zip file for you to play with.

After seeing the end of game of thrones I thought it would be pretty cool to make a game about surviving the north. Currently my assets are far from that look and feel, but my focus is on the core game play elements of fighting, hunting, and self-care. I'd love to add in snow and cold, campfires and alcohol. In the long run, this may be a game about setting up a successful town in the wilderness, or surviving in one. I know a lot about urban design and architectural design, and I think It'd be fun to create a living, self-sustaining town, using AI and resource goals/consumption. In the end, I aim to make this multiplayer, so that you can create and manage towns with your friends/strangers, fight other towns, or survive in the wild. or maybe this may end up being a territory control multiplayer game with NPCs.

Enjoy! Give as much feedback as you want. This is something I don't think I'm going to stop working on, but takes a lower priority than life. Progress will be slow.

Press right ALT to toggle between FPS and TPS cameras.

Hold Middle mouse button to reach out and pick something up.

Press R to equip your sword; Z to put it back; TAB to change weapons.

If the weapon is bugged, sheath and then draw it.

Hold Right Mouse Button to defend from the 'Longpoint' stance. Good for defense against low attacks.

Hold Q / E to transition to 'Ochs'. Good for defense against mid-high attacks.

Some 'secret' swings are hidden in transitions between stances. Play with it to figure them out :) 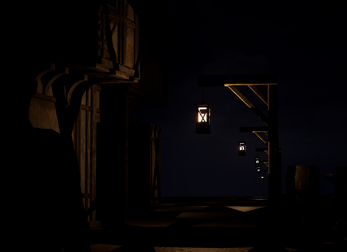